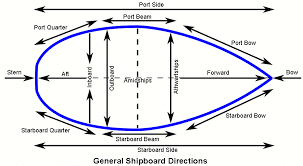 Nashville-based photographer Benjamin “Ben” Perlin maintains a special interest in working with vintage camera equipment as well as processing his photos in a traditional darkroom setting. Outside of his photography work, Benjamin Perlin enjoys sailing.When traveling in a sailboat, or any other sea vessel, one might notice a special vernacular used to delineate parts of the ship as well as the different directions. For those first starting out, it’s important to get a sense of the fundamental terms and what they mean, as many of the more advanced terms refer back to them. The two major directions used in nautical terminology are port and starboard.It’s important to note that these directions are not fixed, such as west and east, but are relative to the front (or bow) of the ship. For example, when facing the bow, the port side of the ship is to the left while the starboard side is to the right. This does not change. When facing the rear (or stern) of the ship, the port side of the ship is now to the right and starboard is to the left.
Posted by Benjamin Perlin at 4:37 PM

A Basic Overview of Aperture, ISO, and Shutter Speed 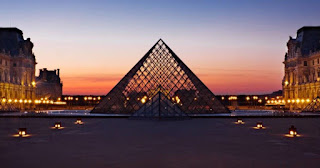 A passionate photographer based in Nashville, Tennessee, Benjamin “Ben” Perlin instinctively knows how to frame the world around him. Preferring to shoot with film, Benjamin Perlin regards every photograph as a physical event that involves feeling the press of the trigger and hearing the shutter click.The exposure of a photograph is controlled by the ISO, shutter speed, and aperture.ISO refers to how sensitive a camera is to light. It is denoted by numbers, such as ISO 100, 200 or 1600. The higher the number is, the more sensitive to light the camera is. When the ISO is high, pictures do not need a large amount of light exposure and photographers should use a high shutter speed to prevent their images from becoming over saturated. Once photographers understand how ISO changes their images, they are capable of shooting in varying light conditions. Shutter speed affects how much light is let into the camera and is typically measured in fractions of a second. Fast shutter speeds leave the camera open to light for a very brief amount of time and are used for capturing motion without a blur. Meanwhile, night and low-light photographs benefit from slower shutter speeds because they allow more light into the camera.Finally, aperture is the hole within a lens through which light travels. This aspect of photography is measured in f-numbers, such as f/1.4 and f/8.0. The f-number denotes the ratio of the lens length to the diameter of the aperture. When the numbers are smaller, the aperture is more open. Changing the aperture gives photographers control over their depth of field. Larger apertures provide a shallower depth of field, and smaller apertures create a wider depth of field.
Posted by Benjamin Perlin at 12:50 PM

Three of the Top Film Cameras of All Time 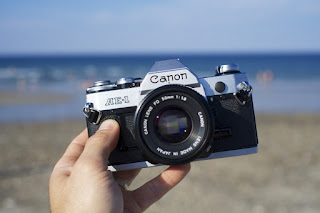 Benjamin Perlin captures the world around him as a photographer in Tennessee. Benjamin Perlin works largely with film and owns several cameras, including a Nikon F2 and Fujica Compact Deluxe.Film has remained a popular choice for photographers since its invention, and it is poised to make a major comeback. Below are three of the best film cameras of all time.- Canon AE-1: Manufactured between 1976 and 1985, the Canon AE-1 is a sturdy and affordable film camera. One of the most widely circulated single-lens reflex (SLR) cameras in existence, it features an automatic mode and shutter priority.- Nikon F2: The first professional 35mm SLR system, the Nikon F2 is an ultra-reliable camera that was produced between 1971 and 1980. Complete with titanium shutter curtains, it is capable of providing speeds of 1 1/2000 of a second and only costs between $350 and $550, depending on color.- Pentax K1000: This camera has an all-metal body and is frequently referred to as a “photography tank.” Despite its heavy weight, the Pentax K1000 is easy to handle thanks to its fully manual settings and the absence of unnecessary buttons.
Posted by Benjamin Perlin at 1:41 PM 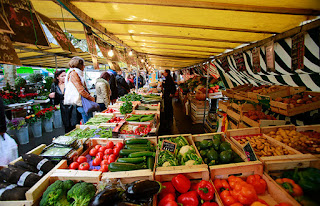 Benjamin Perlin is a Nashville-based photographer who enjoys exploring darkroom techniques and using traditional film cameras. Outside of his work as a photographer, Benjamin (Ben) Perlin enjoys travel and has visited a number of major cities around the world, including Paris.While many people associate Paris with the Eiffel Tower and the Moulin Rouge, Paris has many attractions that are off the beaten path. Le Marché de Belleville is a market that few tourists explore. Visitors are greeted by the smells of spices, vegetables, and roasting meat. The market remains one of the most ethnically diverse in Paris, so tourists can find truly unique items. Paris is also known for its museums. One of the best that often gets overlooked is the Musée Rodin, which is dedicated to the famous sculptor. There, visitors can see The Thinker, The Gates of Hell, The Burghers of Calais, and other masterpieces.Out of the city, tourists can explore La Petite Ceinture, a 19-mile ring of abandoned railway that circles Paris. The railway was the target of a massive restoration project that converted it into a haven for plants and animals. The area remains one of the best spots in Paris for hiking.
Posted by Benjamin Perlin at 5:42 AM

When to Visit Tokyo

Tennessee resident Benjamin Perlin divides his time between photography and philanthropy. For more than a year, Ben Perlin has volunteered at the Tennessee State Veterans Home. In his free time, Benjamin Perlin enjoys travel and recently visited Tokyo, Japan.Although Tokyo serves as a great year-round destination, its peak tourist season is in summer. From June through August, the city is crowded and hot. While average temperatures range from 70 to 85 degrees Fahrenheit, the humidity makes for a sticky vacation. The increase in crowd size means long lines at attractions and high hotel prices.Tokyo experiences autumn from September through November. Autumn is regarded as one of the best times to visit Tokyo because crowds, heat, and humidity die down. Most daytime temperatures range from the low 60s to upper 70s, and many of Tokyo’s trees come alive with autumn colors.Winter in Tokyo lasts from December through February and serves as the low tourist season. On average, temperatures range in the 40s and 50s, but nighttime temperatures can drop below freezing. Humidity is typically low during this season, as are rainfall and crowd numbers. Despite being the low season, accommodation prices often remain high.In March through May, Tokyo experiences springtime. Visiting in the spring grants tourists the opportunity to see the city’s cherry and plum blossoms, which draw crowds. The weather is generally comfortable, with averages between 50 and 70 degrees. Golden Week, a national holiday, can bring quiet days in Tokyo.
Posted by Benjamin Perlin at 10:42 PM

Email ThisBlogThis!Share to TwitterShare to FacebookShare to Pinterest
Labels: Benjamin Perlin, Tokyo, When to Visit

What Are the Different Strategies for Non-Digital Photo Manipulation? 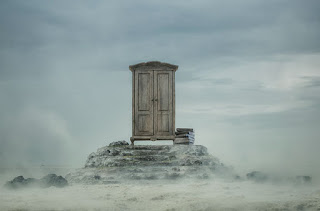 A volunteer with the Tennessee State Veterans Home, Benjamin Perlin has donated his time to a number of local charities. Benjamin Perlin also works at his local Habitat for Humanity Re-Store and is a talented photographer. A fan of film over digital images, Ben Perlin enjoys using science to create the exact images that he wants. Since the creation of photography, a number of different manual photo-manipulation strategies have emerged.One of the most time-tested strategies involves manipulation in the darkroom. Dodging, masking, and burning are all techniques that create effects similar to digital manipulations except that they are done by hand during the printing process. American photographer Jerry N. Uelsmann has been one of the major pioneers of darkroom manipulation. An old-school technique is negative scratching, which came into fashion in the 19th century. The so-called pictorialists used negative scratching to personalize their photos. This strategy uses a small tool to make marks in the negatives. Individuals can also write words on the top of the negative with the scratching tool or even a pencil.Some photographers use double exposures as an artistic technique. While some film cameras have the ability to take a double exposure, individuals often have to use filters to achieve the effect. The filter covers part of the lens for the first shot and a different part for the second shot.
Posted by Benjamin Perlin at 10:51 AM 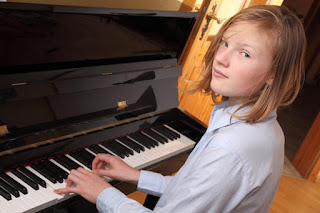 A creative individual, Benjamin Perlin enjoys photography. The owner of numerous film and digital cameras, he often favors the results of film and enjoys darkroom development. Benjamin “Ben” Perlin’s creativity also extends to the realm of music. He enjoys playing the bass guitar and is fond of the piano.Practice is the key to improving overall piano skill, but it can only work if players practice the right things. Ideally, pianists should start their lessons with learning the basic techniques. These techniques help pianists play chords properly and serve as a foundation to build on as they progress. Unfortunately, some beginners learn incorrect techniques during their beginning years. If this is the case, pianists must first learn the correct techniques if they want to improve. Beyond these basics, pianists benefit greatly from learning about music theory. Music theory makes it easier for pianists to connect different chords and weave together varying sounds.Once a pianist has mastered basic techniques and music theory, they can focus on improving other aspects of their playing skills. During this time, it is best for pianists to become their own worst critics. In doing so, they learn to assess sounds, rhythms, and tempo and can easily figure out where a problem may be hiding. Further, pianists need to challenge themselves as they progress. Although playing the same songs repeatedly can improve playing, it ends up limiting a pianist’s musical range. Instead, pianists should challenge themselves with new songs that test their skills. However, they must remain realistic about what pieces they can play and avoid songs that are far above their current skill level.
Posted by Benjamin Perlin at 11:41 AM

Preferring to shoot film rather than using digital camera technology, Benjamin Perlin owns several film cameras including a 1955 Zeiss Ikon Contessa and a Fujica Compact Deluxe. He is also experienced in many darkroom film development techniques, including sabatiering,or solarization.

Perlin spends much of his time working at the Habitat for Humanity Restore, a charity shop that sells secondhand building materials and furniture. The charity provides a deconstruction team to remove donated materials from homes that are being remodeled, at no charge to the donator. The shop sells various items such as doors, windows, and appliances. Perlin’s responsibilities include unloading, sorting and stocking donations, and providing customer service.

Benjamin Perlin also volunteers for various other charitable organizations in the Nashville area, including the Tennessee State Veterans Home in Murfreesboro. In this capacity, he provides friendly company to veterans, listening to their stories and playing games like poker, blackjack, and chess. He has also volunteered as a sorter for Second Harvest Food Bank.